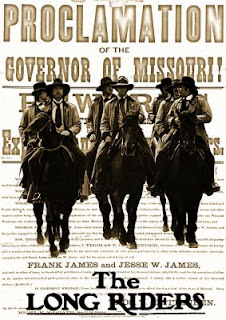 A western about the famous James-Younger gang, notable for casting real-life brothers as the James, Younger, Miller and Ford brothers: David, Robert and Keith Carradine play Cole, Bob and Jim Younger, James and Stacey Keach are Jesse and Frank James, Dennis and Randy Quaid are Ed and Clell Miller and Christopher and Nicholas Guest are Charley and Robert Ford. All in the Family Out West. The movie was co-written by the two Keach brothers, who also co-produced. It's a family affair ...

The Long Riders starts in medias res, when the gang is at the height of their fame, and follows them until their downfall after the raid of the bank in Northfield Minnesota goes terribly wrong. Called a revisionist western by many critics at the time, the film is surprisingly traditional in emphasizing the importance of family life. The original angle is that we're not looking at the Fordian family of righteous men threatened by renegade Indians or degenerated bandits, but at families with a criminal background (the women back home fully accepting the men's way of life) threatened by lawmen hired by the railroad company. Those blood ties keep the group together, but are also its Achilles heel: the Pinkerton agents know the boys will always return to their families and things get very personal when Jesse's retarded young brother is shot by a Pinkerton man and his mother is maimed when the family home is attacked by the Agency.

The Long Riders is vintage Walter Hill, a post-Wild Bunch western if ever there was one. It offers some of the bloodiest shootouts in the history of film making, notably the rendition of the famous Northfield Minnesota bank raid. The gang members are literally trapped by the citizens who have barricaded both ends of the main street and were waiting for them on the rooftops. Eventually they can only escape by galloping through windows - it has to be seen to believed. Hill's editing techniques are less refined, but his slomo violence is more exploitative than Peckinpah's balletic bloodbaths in The Wild Bunch, especially in those moments when the camera almost freezes the action and weird sound effects create a nightmarish, outlandish effect, as if we have accidently wandered off into a horror movie. 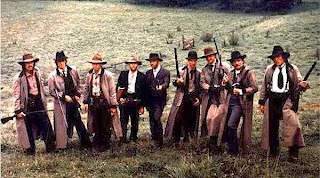 Hill manages to make the consequences of a violent life palpable. The boys live in constant fear of being killed and know they can only survive if they can trust each other completely: one of the Miller brothers is expelled from the group for panicking during a hold-up, and the Fords are rejected disdainfully when they try to insinuate themselves into the group because they seem unreliable. He also creates some poignant scenes of family life, but his narrative often feels a little discursive and - like some have mentioned (1) - lacks a definable point of view. It tries to be realistic and unsentimental, but at the same time it's deeply romantic; the often dark cinematography and the grey dusters worn by the gang members create a certain feeling of doom, but with its warm depictions of gang life and Ry Cooder's genteel score it tends to validate the old myth of Jesse James being a sort of American Robin Hood rather than demythologizing it (2).

In spite of its muddled intentions, The Long Riders is a very likable western. Lacking the large-scale pretentions of Andrew Domink's arty-farty endurance test The Assassination of Jesse James by the Coward Robert Ford (2007), Hill's movie also lacks the quirkiness of Philip Kaufman's The Great Northfield Minnesota Raid, made almost a decade earlier; it's more serious, and in retrospect probably also easier to enjoy. The action scenes are excessively bloody but also elegantly staged, the movie is expertly shot by Ric Waite and breathes Hill's love for the genre from all its pores.

Notes:
* (1) http://variety.com/1979/film/reviews/the-long-riders-1200424606/
* (2) He was named such during his lifetime, mainly by former Confederate supporters, who admired him for robbing banks and railroads, run by Easterners who were threatening their way of life. Popular sympathy for the gang was fuelled by the Pinkerton attack on the family farm, in which Jesse and Frank James's mother lost a hand. See: Philip French, Westerns, p. 170-171, and: Paul Simpson, The Rough Guide to Westerns, p. 13-14 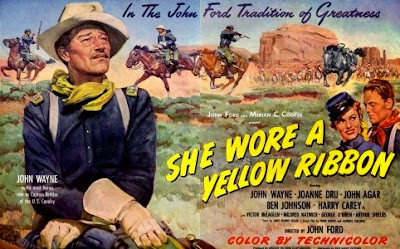 The centerpiece of Ford's cavalry trilogy, the title is a reference to a popular US Military song that is sung over the opening credits. In the movie the yellow ribbon is worn by the commanding officer's niece (Joanne Dru) as a sign that she has a sweetheart in the cavalry, but she refuses to say for whom she's wearing it. The love story is only a minor subplot in the film's main story about an officer, Captain Nathan Brittles (John Wayne) on the verge of his retirement in times of an impending Indian war.

The movie is set immediately after Custer's defeat at Little Big Horn and opens with a statement about his death. Ford had treated Custer's Last Stand - in a symbolic way - in Fort Apache, the first part of the trilogy. Captain Nathan Brittles has only a couple of days left in the army and is given one last mission: to bring the commander's wife and niece to safety before the Indians attack the fort. He's supposed to bring the two women to a stagecoach post, but when they arrive, they discover that the station has been destroyed. Back in Fort Starke, Brittles is told that the date of his retirement has arrived and it's all up to the younger generations now. A bloodbath seems inevitable, but Brittles still has a few hours left as a cavalry officer and uses them for one last desperate attempt to avoid a massacre ... 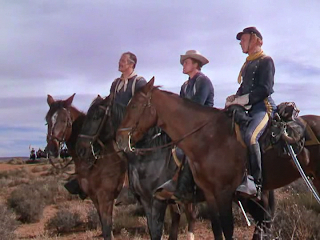 She Wore a yellow Ribbon has always been one of Ford's (and Wayne's) most popular movies, but it has also been criticized for being over-sentimental. Some have also read some strong anti-communist propaganda in it (1). Ford had been accused of communist sympathies after his adaptation of Steinbeck's Grapes of Wrath (1940) and he may have been a bit over-zealous in showing his patriotism, but his movies are not about politics, but about people (2). The Cavalry  is often presented in Ford's movies as a safe haven in the wilderness, and his notions about togetherness originate in this idea, not in political theories about collectivism. In such harsh and dangerous conditions, camaraderie and the force of the group were essential. Some characters in the movie (like Nathan Brittles) have fought for the North, others for the South, and the message is that they must unite, become one in the face of a new enemy.

According to Ford biographer Joseph McBride, the movie also marks the starting point of Ford's (and Wayne's) intolerance with younger generations. Brittles' most loyal servant is a former Confederate officer (Ben Johnson), demoted to the rank of sergeant; his own lieutenants show little responsibility, are more concerned with their mutual rivalry than with the safety of the regiment, while Brittles himself is forced to step out of the box to avoid a catastrophe. His only true soul mate in the movie (apart from his late wife, whose grave he visits to talk to her freely) is an old Indian, Pony That Walks. The two Old Timers know many young men will die in the upcoming battle, but the young (on both sides) are bellicose, won't listen to their wise words. For Ford, the family man, this is a precarious situation. Traditions will only be preserved if the young are willing to learn from the elderly.

Such a complicated situation, requires a special action: when all seems lost, Brittles chases the Indian horses away from the camp, so they'll have to give up their planned attack. The scene may feel a little like a deus ex machina, but it serves the story well, especially in relation to Fort Apache. In Fort Apache a brave but reckless charge of the troops, led by Owen Thursday, had ended in disaster. The honor and unity of the regiment, could only be saved by covering up the man's folly. In She Wore a Yellow Ribbon the daring charge has the opposite effect: a massacre is avoided, but exactly for this reason, no-one will ever hear of it. Brittles stand for those anonymous men who do their job, risk their lives, but never end up in history books.

Allegedly this was John Wayne's favorite of his performances. John Ford didn't want him for the part of Nathan Brittles, but changed his mind after he had seen him in Red River. In Red River a 39-year old Wayne had played a character in his fifties (the film was released in 1948 but shot in 1946), now he was supposed to portray, at the age of 42, a man in his sixties. Not for a second we have the idea we're watching a young actor playing an old man: Wayne is Nathan Brittles, the veteran who's experiencing the existential angst of becoming a useless individual: his beloved wife has already passed away, he has no specific future plans, and all his friends are army men. 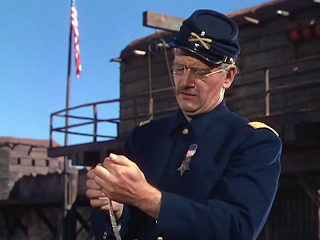 The tone is elegiac, melancholic, with some comic relief delivered by Victor McLaglen's hard-drinking sergeant. Wayne himself wasn't too happy with the ending, in which Brittles is called back, and offered the job of chief of scouts; he thought it would've been better to let Brittles ride into obscurity (4). Winton Hoch received an Oscar for his cinematography, which pays homage to the style of western artist Frederic Remington (5). There's an iconic scene of the troops carrying away a wounded soldier through Monument Valley in the midst of a thunderstorm. But in spite of all this picturesque beauty, the movie scores above all with some of its 'smaller scenes', such as Brittles visiting his late wife's grave, a woman watching the men march out and wondering how many will return, and the scene in which Brittles receives a watch from the men who have served him for years, and puts on his glasses, not only to read the inscription on the plate, but also to hide his tears.

* (2) If anything, Ford was a conservative. For this reason Roger Ebert called him an odd choice to direct an adaptation of Steinbeck's book, which clearly expressed left-wing views.
* (3) Paul Simpson, The rough Guide to Westerns, p. 121
* (4) Gary Wills, John Wayne's America, p. 181

* (5) Ford said about this: "I tried to copy the Remington style there. You can't copy him 100%, but you can get the color and the movement"