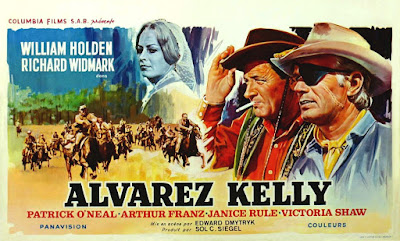 Supposedly based on actual events, this Civil War drama tells the story of an Mexican-Irish adventurer (look at the name of the titular character) who is contracted to deliver a herd of about 2500 cattle to the Union. The herd is brought to a Virginia plantation, but the mistress of the mansion is conspiring with one-eyed Confederate Colonel Rossiter, who wants to steal the cattle to feed the starving soldiers who are defending the town of Richmond. So with the help of the lady, Kelly is kidnapped at night and forced to drive the cattle to its new destination. When Kelly refuses to go along with the scheme, Rossiter shoots off one of his fingers, threatening to shoot off another one for every day he refuses to cooperate ...

This is one of the two westerns directed by Edward Dmytryk in the fall of his career (the other being Shalako). Director Dmytryk had been one of the “Hollywood Ten”, ten former members of the communist party who refused to testify for the House Un-American Activities Committee in the late forties and had their careers disrupted. He spent some time in jail but eventually decided to testify (under high pressure) and got permission to work again would direct some of the best westerns of the fifties, such as Broken Lance (1954) and Warlock (1959). Unfortunately, his westerns from the Sixties do not fall into the same category.

The premise of a man who’s forced to do a job against his will, may suggest that we should read the movie as a personal statement, but Alvarez Kelly never feels as if Dmytryk put much of himself into it. It’s a rather bland affair, top-heavy, with a spectacular finale but not much else to hold people’s attention for the full length of the 114 minutes of running-time. There’s a sub-plot of Holden helping Widmark’s bride-to-be (played by Janice Rule) to elope with another man, no doubt meant  to intensify the antagonism between the two men, but it basically slows an already slow-moving picture further down.

Alvarez Kelly isn’t bad, but it’s not particularly good either. Despite some modernist tendencies (the two man are rather cynical types and Holden’s Kelly is a ‘man in the middle’, a opportunist who doesn't rally care for any of the two warring factions and just wants to make money in wartime), the movie has an old-fashioned feeling hanging over it. Some think it was merely an attempt to extract some of the dramatic qualities of Holden’s biggest success, The Bridge on the River Kwai (in which he also played an opportunist forced to take part in a dangerous mission) and present them in a western setting (1).

The star power is not as electrifying as some may have expected, but both Holden and Widmark turn in good performances. In the case of Holden this may come as a surprise, if you know that he had serious drinking problems around this time and also caught salmonella poisoning while filming on location in Louisiana. In a couple of scenes you notice that he had trouble remembering his lines, but overall he’s this confident actor we all know, a man who made acting look easy.

And then there’s this spectacular finale. To avoid a confrontation with Union troops, Kelly and Rossiter have chosen a route through swampy terrain; the plan seems to work, but after Grant has taken the city the men are forced to take the herd further south, over a bridge protected by Union soldiers. In a very daring move, Kelly stampedes the cattle into the Union lines. A sequence worth waiting for.