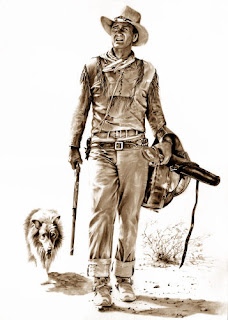 
When Hondo was released theatrically, it was compared (unfavorably) to Shane. John Wayne is Hondo Lane, and we first spot him walking out of the desert, into the direction of a farm, his saddle over his shoulder, followed by his dog Sam. The ranch is occupied by a young woman, Angie Lowe, and her 9-year old son Johnny, who starts idolizing the newcomer (very much like Brandon De Wilde in Shane). But instead of becoming friends with the young woman's husband, Hondo will have to confront him. And instead of glorifying the pioneer spirit and progress, Hondo is a film about the repercussions of progress and the downfall of a people and their culture.

Angie and her son have been deserted by Mr. Lowe and live, virtually without protection, in the middle of Apache land. She tells Hondo that Mr. Lowe may come home every day, but he knows better and even the Apaches won't believe her. The Lowes have always lived in peace with the Apaches, but after the white people have - once more - broken the peace treaty, an Indian uprising is imminent. Hondo has lived with the Apaches (and even has some Indian blood) but these days, he's working as an army scout. So unlike Shane he's not an outsider: he must make a choice between his white employer and the red people he has lived with.

Hondo was based on a short story (later a novel) by Louis L'Amour, The Gift of Cochise. It was a production of Wayne's recently founded company Batjac and originally Wayne wouldn't star in it. But when he discovered that the intended star, Glenn Ford, had fallen out with director John Farrow during the making of Plunder of the Sun, made shortly before, he decided to play the role himself. It was a difficult production. Hondo was shot from June 8 to early August '53 (1), on various locations in the Utah and Mexico, and the actors and crew members had to work in atrocious heat, with average daily temperatures rising to 38 °C/100 °F. A tropical cloudburst was used by the filmmakers to shoot a really harrowing scene in a torrential rain. The film was shot in 3-D and the crew had to carry the heavy 3-D cameras through the desert. Ironically, when the film was released, the 3D fever was over its peak and Hondo was shown in 2D in most theatres.

Today Hondo is often mentioned as one of the Duke's best movies not directed by Ford or Hawks (by the way: Ford visited the set and apparently he directed the final scene). The story is routine but the sympathetic depiction of the Indians is refreshing. They're shown as noble people, angered by treaty violations and a lack of respect for their way of life. The final scene (directed or not directed by Ford), with Hondo watching the Indians riding off after their leader has been killed, knowing that their days are over, is touching. The film also benefits from a strong supporting performances by Australian actor Michael Pate (as Indian leader Vittorio) and Geraldine Page (as Mrs. Lowe). Page was a stage actress and many thought it was a risk to cast her alongside John Wayne, but the combination worked marvelously; they have a very funny scene at the river. A very satisfying movie.

Hondo was remade for TV by Wayne's production company in 1966, as Hondo and the Apaches, and was later developed into a short-running TV-series. Ralph Taeger took over from Wayne as Hondo, but Michael Pate reprised his role as Vittorio.

(1) Newt's John Wayne Site, Hondo Review
(2) According to Michael Pate, in an interview added as an extra to the DVD release, most of his scenes were shot on and around a rock in the middle of the desert, and the only way for him to get some shade was to take place under his horse.
- March 25, 2013