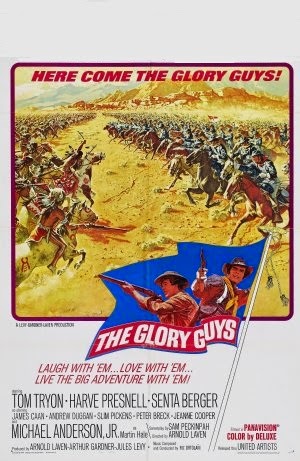 A fictionalized western drama, based on Custer’s Last Stand, telling the story of an onerous officer who sends all of his men to death in a disastrous campaign against the Sioux. The script was written by no other than Sam Peckinpah and based on a novel by Hoffman Birney called The Dice of God. Peckinpah wrote the script between November 1956 and March 1957, at a salary of $500 a week (1) but it was only filmed a decade later, without any invlovement of Peckinpah.

With its colorful depiction of army life in an around an army outpost the film is often compared to John Ford’s Fort Apache, also inspired by Custer’s Last Stand. But instead of concentrating on the Custer-like commander, General McCabe, the story is told from the viewpoint of a collection of characters and the women in their lives. Captain Demas Harrod (Tryon) has served under McCabe before and knows the man is capable of anything; in a campaign against the Apache, an entire regiment was slaughtered because McCabe thought the men were expendable. Harrod has an eye on a young widow (Senta Berger) but she’s also courted by army scout Sol Rogers (Presnell), who hasn’t asked her hand yet, but is sure she’ll have him. Slim Pickens is the drill sergeant who has the thankless task to get a troupe of incompetent new recruits into shape; among them are a young James Caan as a hard-drinking rake with an Irish accent and an even younger Michael Anderson Jr. as a lad who ran away from a shotgun wedding.

By the time the movie went into production, Peckinpah was working on his own version of the Custer myth, and it’s clear that his writings for The Glory Guys served as a reference point for Major Dundee. The structure of the movie and several plot elements are similar; both films depict the enlistment and training of recruits who are eventually led to the battlefield, both are shot on location in Mexico and in both cases the protracted action sequence near the end takes place near a river. Pickens, Berger and Anderson Jr. appear in both films and the character played by Anderson Jr. is almost a copy from the boy he played in Dundee. But in Dundee, Peckinpah shifted his attention to the character of the Ahab-like commander, and also gave the story more depth by presenting it as a post-Civil War drama about resentment and reconciliation.

With a love triangle and some vaudeville type of humor thrown in, The Glory Guys is an often lumbering cavalry versus Indians affair, but it builds up to an exciting climax, worth waiting for. There are also a couple of vintage Peckinpah moments such as a helpless young trooper being viciously beaten up by law men in a dark alley and a macabre - but rather funny - scene with a simulated Indian attack (a recruit almost strangling a fake Indian!), echoing a scene from The Deadly Companions, with Indian ‘playing’ a stagecoach robbery. Tryon and Presnell are no more than adequate as the two men vying for Berger’s attention (with his fifties hairdo Presnell doesn’t look like an army scout), but Pickens is a delight, playing the sergeant in his trademark, semi-comical style. Laven’s directional style is routine, but James Wong Howe’s cinematography is breathtaking, especially during the elaborated battle sequence, a truly amazing visual experience that must have shocked cinemagoers in those days.