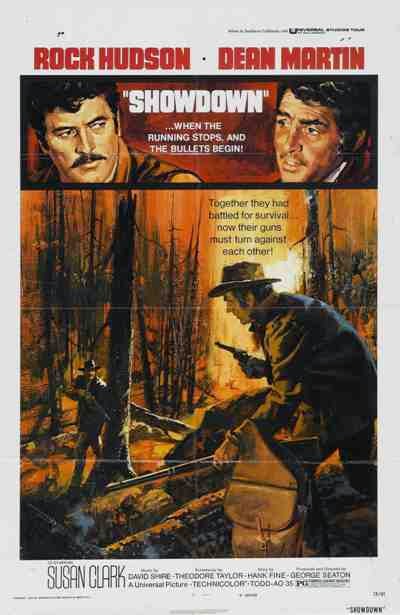 A western telling the familiar story of two friends ending up on different sides of the law. It was the last western for both Dean Martin and Rock Hudson and the only time they appeared together in a movie. They play two childhood friends who have already drifted apart at the film’s start: Chuck (Rock) is a married man and a rancher, Billy (Dino) has become a drifter and a train robber. Billy has spent some time in Mexico, but after his return to Texas, he robs a train not too far away from where Chuck lives, not realizing that his former buddy has become the local sheriff.

The story of the two friends is shown in a series of flashbacks, nicely introduced by black and white stills. We see how they grew up together, virtually becoming brothers. They went separate ways after both men had fallen in love with the same woman, Kate (played very well by Susan Clark, charming as ever). Kate initially fell for Billy, the more charming of the two, but eventually chose to marry the Rock solid Chuck, because she reckoned he would make a better rancher. Being the sheriff, Chuck is now forced to bring up his old buddy, but Billy’s is also chased by two former partners in crime, who were deserted by him after they had fallen out after the robbery ...

At first sight Showdown is a old-fashioned movie. There are strong similarities to George Marshall’s Texas (1941), in which Glenn Ford, William Holden and Claire Trevor play similar characters, but it also adopts some of the melancholy of the revisionist westerns of the period, often dealing with the theme of the ‘End of the West’. A date on a gravestone (Chuck and Kate had a stillborn child) tells us that we’re in the late 1890s, when the West was no longer Wild (at least not as wild as it used to be). Chuck is a sheriff of the old stamp, instinctively rejecting the bureaucracy he’s confronted with. The finale echoes Peckinpah’s Ride the High Country, the two former buddies facing Billy’s partners in crime together, side by side, protecting each other, like they used to do in the good old times.

Showdown is not a great movie; the flashbacks are well-integrated into the story-line but there are too many of them. Both Martin and Hudson were past their prime (especially Martin looks old and tired) and they didn’t get along very well. Dino was also unhappy during the shoot because of the death of his favorite horse Tops (1). But in spite of its shortcomings, it’s not an unpleasant watch; the script (by Theodore Taylor, based on a story by Henry Fine) could have fleshed out the characters a bit more but it’s still a nice story about ‘former pals becoming pals again under pressure’. Ernest Laslo’s widescreen cinematography is impressive and the finale, a remarkably violent showdown in the midst of a forest fire, is quite exciting, even if the dark colors of some of the stock material used (of forest fires) clash with the clarity of Laslo’s cinematography.


BOTTOM LINE:
A predictable but not unpleasant western about two childhood friends ending up on different sides of the law. Slow-moving, but beautifully shot and with an effective finale.
6/10

* (1) Jeremy Ritchie, A Showdown with Dean Martin and Rock Hudson, on: Moon in the Gutter