Man in the Wilderness 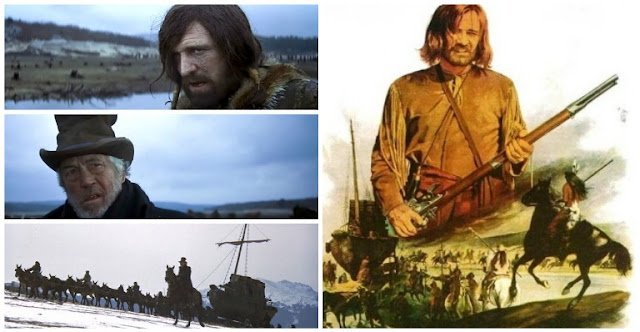 MAN IN THE WILDERNESS

Like the upcoming The Revenant (2015, Alejandro G. Iñárritu) this movie is based on the real-life story of trapper Hugh Glass, who was left for dead after a bear attack by the members of his party during an expedition through the Northwest territories. The new movie adaptation was also the reason to return to the older one. I had seen it, most probably on videocasette, somewhere in the Eighties and I remember that I wasn't very fond of it then. I thought it was slow and also rather confusing: for one thing I didn't understand why the group of fur trappers led by John Huston were wheeling this large boat (looking like Noah's ark) over the mountains.

In the movie Glass is called Zachary Bass, and he's played by Richard Harris, fresh from his turbulent adventures with the Sioux in A Man Called Horse (1970, Elliot Silverstein). Zachary is the guide of a group of fur trappers who are returning from an expedition up North with a boat (dragged by mules) full of furs. When mauled by a grizzly bear, the leader of the trappers, Captain Filmore Henry is convinced that Zacharay will not survive his wounds. He therefore decides to move on and leave only two of his men behind to bury the dying man. Zachary is even deserted by these two when hostile Indians are ranging the woods, but he miraculously survives his terrible wounds and - after a series of trials - start trailing those who abandoned him ...

Man of the Wilderness was shot in Spain and some have noted  that the locations have little in common with the Northwest territories where the events are supposed to take place, but the cinematography of the  rugged Spanish terrain is lush and impressive. The film works well - very well actually - as long as it stays with the heavily wounded Bass. The real-life trials and tribulations of Hugh Glass were staggering, almost unbelievable: he had festering wounds, a broken a leg and severe cuts on his back and in his left flank; to prevent gangrene he let maggots eat the dead flesh around the compound fracture of his leg. The movie renders his endurances very well; the first three quarters of an hour are gripping, occasionally (literally) painful to watch.

Unfortunately it does not stay with the suffering, fighting Bass; there are flashbacks to the past, explaining how Bass became an atheist and wanderer (in reality they're so splintered that they hardly explain anything) and the camera also shifts between the crawling man and the party that left him for dead. The real-life Captain Henry (his name was William Henry Ashley) wanted to ascend the Missouri river as part of a fur-trading venture, which explains the boat, but in the movie it all looks absurd. The scenes of the ship on dry land are majestic, but we get an awful lot of them and the movie rambles on and on to an inconclusive ending. We're also supposed to believe that the heavily wounded Bass eventually managed to catch up with the expedition (which would have been an effort of truly superhuman proportions). In reality Glass did not follow their trail but tried to reach the nearest settlement, Fort Kiowa on the Missouri river.

In the end Man of the Wilderness falls into the category of movies that can be described as 'interesting-good-but-not-great'; it has been labeled as an anthropological western (some of the scenes of Indian life are touching, notably a scene of a woman giving birth in the woods) but also as a study in sado-masochism and excess. I'm normally not a fan of Richard Harris but he turns in a very convincing performance and John Huston is also fine as the party leader and lunatic Henry (clearly modeled after Captain Ahab from Moby Dick). The movie dates from the time when the SPCA (Society for Prevention of cruelty to Animals) was still fighting a fierce battle to improve the treatment of animals on film sets; watching the movie it's impossible to imagine that 'no animals were hurt in the making of it'. 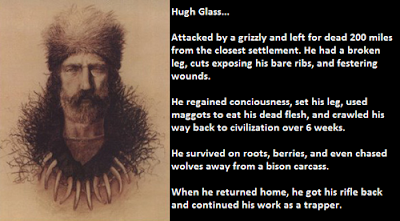 * Revenant - Hugh Bass covered more than 200 miles (320 kilometers) to reach Fort Kiowa, which gave the local Indians the impression that he had come back from the other side; he was therefore called a 'revenant' by them, that is a ghost (from the French word revenant, ghost. The French word comes from the verb (it's a participle used as a substantive, a common use in French) revenir, to return, come back from the other side)