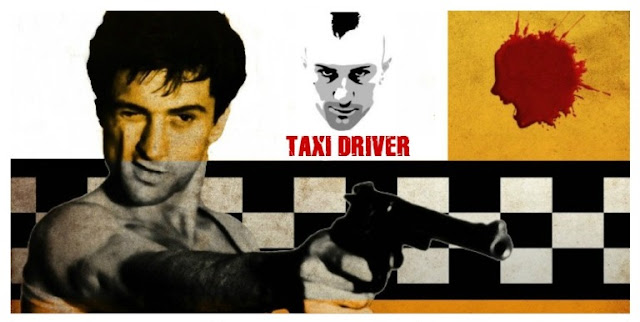 I - A young man with a sleep disorder

Robert de Niro is a Vietnam veteran with a sleep disorder called Travis Bickle. After he has entered an office to apply for a job the following conversation ensues:


"How's your driving record. Clean?"
"It's clean, real clean. Like my conscience."

Travis Bickle's conscience is clean. The problem is that in his opinion Travis Bickle is virtually the only one in town with a clear conscience. Look at his description of nightlife:


"All the animals come out at night - whores, skunk pussies, buggers, queens, fairies, dopers, junkies, sick, venal. Someday a real rain will come and wash all this scum off the streets."

Today many people think Taxi Driver is one of the very best movies of the seventies - probably even the best - but when it was first released, it got mixed reviews. To some it was a masterpiece, others thought it was a cold-blooded, repulsive descent into the underbelly of modern city life. It was awarded the Palme d'Or at the Cannes Film Festival, but was overlooked by The Academy. The Oscar for best motion picture went that year to (believe it or not) ... Rocky.

Taxi Driver will make many of us think of the shooting incidents in the US that fill the headlines on regular intervals. Often the perpetrator turns out to be one of those quiet young men who think the world is sick and needs to be cleaned up. Like some have said: the movie seems a frighteningly plausible case history of such a person (1).

Travis identifies himself with two persons, Betsy, a young woman he's attracted to, and Iris, a twelve year old hooker he feels responsible for. Betsy is a volunteer for the campaign of Charles Palantine, a senator running for president. Travis thinks Betsy and he are soul mates, so Palantine must be a good man, that is: a man who wants to clean up the dirt. When he's rejected by Betsy (after taking her to a sex movie on a first date!) and subsequently finds out what Palantine really stands for, he decides to kill him. In the meantime he has bought four pistols and a jungle knife, and practiced his skill every night in front of the mirror:

He has decided to give a large part of the money he has earned to Iris, so she can return to her parents. But when he's about to draw his gun, he is recognized by a secret service agent he has once spoken to, and flees from the spot in panic ...

... and freaks out ... In one desperate and outrageous attempt, Travis tries to clean up the brothel where Iris is abused night after night. Three persons are killed in the delirious gunfight and Travis himself is badly wounded. Iris ends up sitting beside the heavily bleeding man, crying, frightened, traumatized ... 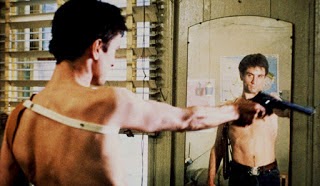 II - Who is Travis Bickle?

A lot of confusion was created by the film's coda, in which a recovered Travis Bickle seems to have become a popular hero. We see him reading a letter, sent to him by Iris' parents, who thank him for all the things he has done for her. She's doing well, and she's attending school again, so he's told. The scene seems to deny the entire movie. All of a sudden we're supposed to see Travis as a (successful) vigilante. Wasn't he a psycho after all? Or is Scorsese mocking the media, who create popular heroes whenever they (or the world) needs one?

Some have interpreted the scene as a hallucination of a dying Travis Bickle. Both Scorsese and Schrader have nourished the idea with statements about the nature of the things happening in Taxi Driver. They reflect a state of restricted awareness, that makes a person wonder whether he's awake or sleeping (2). Schrader's major source of inspiration, was Dostoïevski's Notes from the Underground, about an embittered, nameless man, who has withdrawn from society and analyses modern life - and rejects it because it is impious and devoid of reason. Dostoïevski's novella is - like Taxi Driver - a first person narrative, and the same term - restricted awareness - has often been used for the state of mind of the underground man; furthermore we don't know if the narrator of a first person narrative is reliable: his account of the events might not be in accordance with the facts.

There are also similarities to the endings of some of John Ford's westerns, such as Fort Apache and The Man who shot Liberty Valance, in which a man is declared a hero although he doesn't really deserve this honor. Both Scorsese and Schrader have declared that a third Ford movie, The Searchers, was a conscious influence. According to Robin Wood, Travis Bickle is on one hand a western hero transplanted in a modern urban wilderness - he derives in particular from Ethan Edwards (John Wayne's character in The Searchers) - but also related to the psychopaths and monsters of contemporary horror movies. In other words: he represents two opposite archetypes. This clash of artistic personalities, would also reflect the national ideological dilemma of the American nation in the mid-seventies (3).


III - Not the last word

The last word has not been spoken about this movie and its protagonist, the insomniac Travis Bickle. Like some of Franz Kafka's novels, it seems open to radically different, often conflicting interpretations. We are afraid of Travis Bickle and won't accept him as a popular hero, yet we sympathize with him when he unleashes his demons. These contradictions don't hurt the movie's poignancy, but make it, quite on the contrary, only more powerful.

The build-up to the devastating finale is unequaled in the history of cinema. From the very first moment, Taxi Driver feels like a descent into a maelstrom. The bloody shootout in the brothel, is as shocking today as it was nearly forty years ago. The almost laconic, yet haunting score by Bernard Hermann (unfortunately his last) is a perfect counterpoint to the claustrophobic action. Several scenes, like De Niro in front of the mirror, are part of the collective memory of mankind. Film making at its zenith. 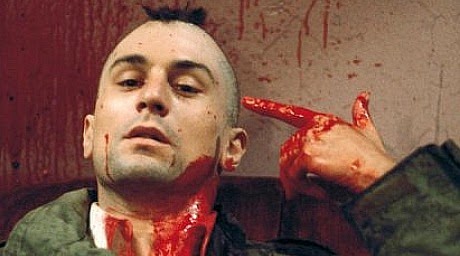 * (1) Variety Movie Guide, Edited by Derek Elley, New York, 2000
* (2) On the film's Wiki Page a reference is made to Scorsese on Scorsese, a series of interviews with the director. Scorsese told the interviewer that "(...) the film arose from [the] feeling that movies are like dreams, or like taking dope (...); he added that he "(...) [had] tried to induce the feeling of being almost awake."
* (3) Robin Wood on Taxi Driver, in: The International Dictionary of Films and Film Makers, New York, 1985.

Email ThisBlogThis!Share to TwitterShare to FacebookShare to Pinterest
Labels: Non-Westerns 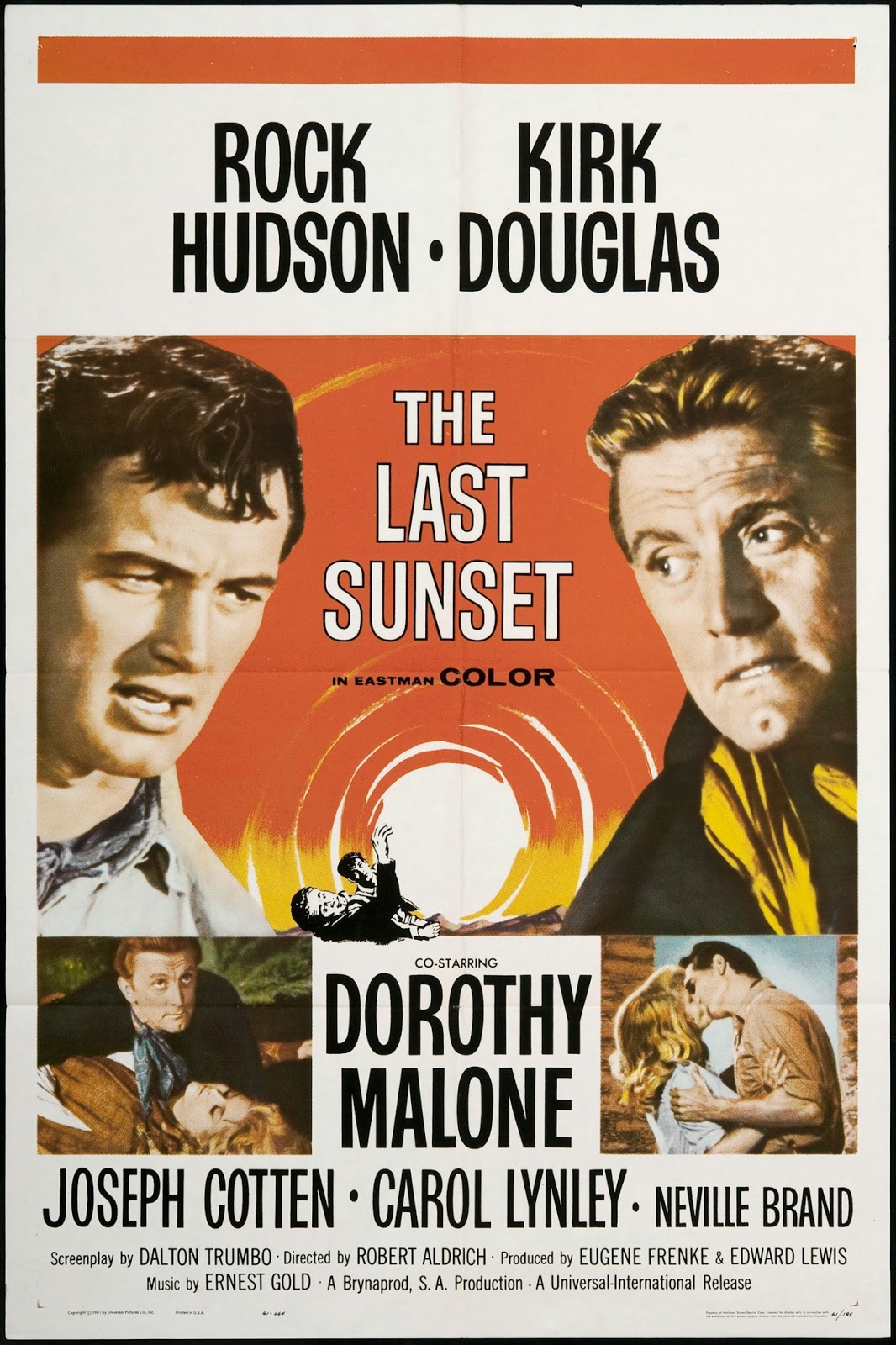 In spite of story elements such as a cattle trek and a marshal on the trail of a wanted man, this is not an ordinary western, not by any stretch of the imagination. It's a low-key study of sexual obsessions, with Kirk Douglas as the good-for-nothing, but sympathetic philanderer returning to the woman he once deserted, but falling for her daughter, the spitting image of the girl he once loved.

Kirk Douglas is the man on the run, Rock Hudson the lawman in possession of a warrant to arrest him. Douglas has crossed the Mexican border and turned up at the ranch of a drunken cattleman John Beckenridge (Joseph Cotton) and his wife Belle (Dorothy Malone), who happens to be his old flame. Beckenridge offers Douglas a job as a trail boss for a drive back to where he came from, and surprisingly he accepts, probably because Belle and her blossoming daughter Missy will accompany the men. Hudson has followed Douglas into Mexico, but having no authority to arrest him on foreign soil, he joins the drive as well, planning to arrest him upon their arrival in Texas. After Belle’s husband is killed in a barroom brawl, Douglas asks for her hand, but she prefers the lawman to her former lover; Douglas then turns to her daughter Missy, who was already infatuated with him, and sleeps with the young girl. But then Belle reveals a dark secret that will change all things and lead to an emotionally devastating finale ... 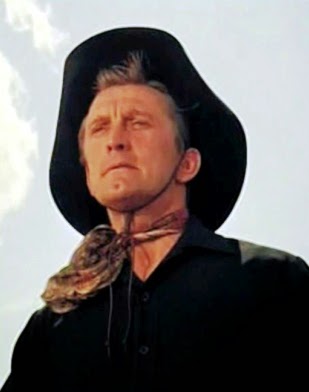 The movie has been described as Freudian, and with a story about sexual frustrations and neurosis, it’s hard not to think of good old Sigmund, but instead of illustrating an Oedipus complex, the story is closer to Sophocles' Oedipus Rex, the play that gave the Freudian complex its name. In other words, it's more Rex than Complex. The Freudian theory says that a father and a son are each other's rivals, because the son secretly desires to sleep with his mother. In Sophocles' play the son accidently kills his father and sleeps with his mother, causing the woman to kill herself, because she had not recognized her own son. The ending of The Last Sunset is a bit similar, with Douglas using an empty gun in the final duel with his opponent (Rock Hudson) after he has been told that the girl he slept with, is his own daughter.

The Last Sunset is a bit of a slow starter, and like many western from the period, it suffers from a stark contrast between good-looking, atmospheric location work (in Mexico) and unconvincing interior shots; there are also a few awkward (if funny) musical interludes (imagine Kirk Douglas singing in Spanish!). As usual, it’s the more irresponsible character of the two leads who gets most attention; Hudson’s lawman is a bit bland, but Douglas’ black-clad opportunist is a typical Aldrich character: behind their macho posturings, they often conceal a deeply insecure nature, and we sympathize with them because they’re vulnerable in spite of their bravura. In a nice example of a negative phallic symbol, Douglas wears a small derringer behind his waist belt instead of a large six shooter in a holster.

This is not a perfect movie; Dalton Trumbo’s literate script, rife with allusions and classical references, may feel a little overwrought and some thought - for good reasons - it was more drama than western (or even more melodrama than drama), but once the story picks up, and we get familiar with these odd characters, it's as compelling and fascinating as any other thing Aldrich has ever done. And note this final duel. Sergio Leone must have had it in mind when developing his ritualistic style of filming shootouts (and the build-up to them).