The Guns of Fort Petticoat 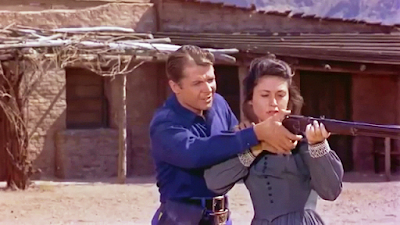 The first movie production by Murphy-Brown Pictures, a partnership Audie Murphy had formed with Harry Joe Brown. It remained their only movie because of personal differences between the two partners. The Guns of Fort Petticoat was panned by contemporary critics who thought this outlandish story about a petticoat army fighting off an Indian attack didn't combine well with the historic background of the plight of the red man, but the movie seems to have withstood the test of time pretty well and today many think it's one of Murphy's more enjoyable efforts

The story is set in full Civil War time. Audie Murphy is Lt. Frank Hewitt, a guy from Dixie in Yankee service. When some Cheyenne braves leave their territory, Hewitt's commander, the racist Colonel John Chivington decides to punish them by attacking their virtually unprotected village. The result is an infamy known to history as the Sand Creek Massacre. Hewitt knows the Indians will seek revenge by attacking innocent homesteaders and with most men departed to fight in the Civil War, only women and children are left to defend the homesteads. He deserts to warn the women but is first treated by them as a 'blue belly traitor'. Things change when he shows them the dead body of a woman tortured and murdered by marauding Indians. Hewitt and the women entrench themselves in an abandoned mission post to fight of the imminent Indian attack ... 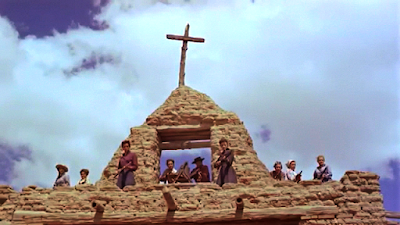 AudieMurphy's real-life experiences (he was one of the most decorated combat soldiers of WWII) always seemed to lend credibility to his screen persona. He is quite convincing as the experienced soldier training the women in combat techniques, slowly turning the colorful troupe into an efficient fighting unit, the Guns of Fort Petticoat. Some clichés are tackled (several women and one child are killed during the attack), others remain intact; there's room for romance and comedy and yes, some of the comedy feels a little out of place, notably a scene of Murphy spanking the hot-headed Kathryn Grant. But let's not forget that many contemporary westerns (including those by the likes of Ford or Hawks) offered vaudeville-like interruptions of a serious narrative.

Director Marshall was no Ford or Hawks but he had a long career in both the western and comedy genre and overall the serio-comic mix works quite well. Only the coda, in which a court-martialed Hewitt is discharged thanks to the intervention of the women (and his commanding officer is charged instead), rings untrue. There's nothing wrong with using historic events as a background of a fictional story, but John Chivington was forced to resign after a thorough investigation by the Congress, and to suggest that his fate was sealed during an improvised military court by a group of women who stood up for the man who had taught them how to fight, is sheer nonsense.

Jane Got a Gun

Jane Got A Gun

Ever since I saw her in Luc Besson’s Leon: The professional (1994) I have a soft spot for Natalie Portman. In 1994 she was thirteen, but looking like a child, today she’s 35, but still looking ever so young. In Jane got a Gun she is a young woman who has lost her innocence, but not her vulnerability. She’s the mother of a six or seven year old girl and the wife of a man with a questionable reputation, Bill Hammond (played by Noah Emmerich).

One day Bill comes home with eight bullets in his back. The men who shot him, the Bishop brothers, are on their way to the farm and their arrival will mean even more trouble. The only one who can help Jane and her wounded husband, is their neighbor Dan Evans (Joel Edgerton). Main problem: Dan is not only their neighbor, but also Jane's former fiancé, the man she left to become Mrs. Hammond ...

Jane Got a Gun was a troubled production. At some point, the names of Michael Fassbender, Sam Worthington, Bradley Cooper and Jude Law were all mentioned in relation to the production. The original director, Lynne Ramsey, left a few days into shooting and Edgerton was first cast as the villain but then became the hero after Worthington had left the production. For a movie with this history, Jane got a Gun isn’t bad.

(Text continues under the pic)

The film has an interesting setting - the days immediately before and after the Civil War. It also has interesting characters: the three leads, Jane, Bill and Dan, all have their shady sides, and none of them is 'innocent': It soon transpires that Jane did not leave Dan but that, quite on the contrary, he left her, to fight in a war he believed in. Jane then headed West, in search of a new life, joining a wagon train led by two brothers, John and Vic Bishop, and realized far too late that the brothers had special plans with her. She only accepted to become the wife of a man with a questionable reputation because he was the only one who cared when she was in a humiliating, dishonoring situation.

The film was criticized for its complex, flashback-driven narrative and I do agree that this back-and-forth, back-and-forth structure occasionally works a little confusing, but the twists, turns and revelations will surely hold your attention (and the final twist, concerning a second daughter, is particularly surprising). The action moments are often unexpected (and very brutal), but the movie seems to lack a real western ending: the attack on the farm is set at night and if it brings a Peckinpah movie to mind, it's not one of his westerns, but his siege drama Straw Dogs.