The Sheriff of Fractured Jaw

In this British-American comedy western Kenneth More stars as Jonathan Tibbs, the last surviving member of a family of British gunsmiths. He has no desire to step into his father’s boots - he’d rather spend his time on his inventions (that often don’t work at all) - but when he discovers that the family business is not doing well, he decides to travel West. To the American West that is, because in the 1880s the Far West has become the best outlet for guns. Jonathan has never rode a horse or fired a gun, but thanks to a side-effect of one of his gadgets he is taken for a gunslinger and named sheriff in the western town of Fractured Jaw.

The idea for the movie is usually traced back to Leo McCarey’s classic comedy Ruggles of Red Gap (1935) in which an English manservant (played by Charles Laughton) ends up in the American West, but also seems to have taken inspiration from Nicolai Gogol’s famous 19th Century play The Inspector General (in Russian Revizor), in which a civil servant is held for an important dignitary and starts acting like one. Gogol’s biting satire on human greed, stupidity and political corruption has been turned into a rather mild oddball comedy telling the story of the tenderfoot taming the western town, including the stern and buxom saloon lady, played by no other than Jayne Mansfield.

The Sheriff of Fractured jaw is occasionally funny and overall it's a pleasant movie to watch, but it's never as hilarious as the now classic trailer will try to make you believe. Some of the jokes work, others don't. The best jokes come from the fact that Jonathan thinks the American West is still ruled by British manners ('once a colony, always a colony') and therefore tries to solve every problem with a stiff upper-lip and a wink of the eye. It’s quite funny to hear him say, leaning out of the window of a stagecoach under Indian attack: "Dear God, somebody should talk to these savages!" (political correctness wasn’t on the program yet in 1958!), but turning a brave into a butler is not funny, just plain stupid.

(Text continues under the pic)

20th Century Fox had bought the rights to the original stoy as a possible vehicle for American actor Clifton Webb, but director Raoul Walsh insisted on hiring More. Blonde bombshell Mansfield - at the two peaks of her career - was his personal choice as well; her singing voice was dubbed by Connie Francis. The interiors were filmed in the British Pinewood Studios but with the new cinemascope process in mind, Walsh decided to shoot some of the outdoor scenes in Spain. It was the first major western to be shot in Spain and some have suggested that its look might have told other - notably Italian - directors that the Spanish countryside was an ideal substitute for the desolate American West. The film doesn’t really feel like a spaghetti western but the gag with the small derringer, that snaps out of More’s sleeve when he extends his arm, was copied by Lee van Cleef in Sergio Leone's For a Few Dollars More and gadgets would become part of Lee's collection of guns throughout his career in Italian westerns.

The Man Who Loved Cat Dancing

Burt Reynolds is Jay Grobart, a former army captain who has spent some time in jail for shooting the man who raped and murdered his wife, an Indian woman named Cat Dancing (hence the odd title). After his release, he takes to robbing trains with three of his friends, Dawes, Billy and Charlie. Sarah Miles is Catherine Crocker, a highborn Lady who accidently witnesses their latest robbery. Jay wants to take her horse, but Dawes and Billy are also interested in the lady. When they flee into the mountains, they're persecuted by Lapchance, a railway detective, and lady Catherine's husband William ...

I had always avoided this movie, because of the negative reviews, so I was surprised to see a genuinely enjoyable western. Okay, it runs for nearly two hours, at least half an hour too long, and there are a few issues with the script, but Reynolds and Miles are a nice, unlikely couple and Jack Warden and Bo Hopkins are an interesting pair of sex-crazed baddies, both trying to get their filthy hands on Mrs. Crocker. There's no too much action, but those sparse action moments are remarkably cruel and violent, notably a protracted fistfight between Reynolds and Warden. 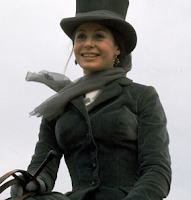 Reynolds' performance in Deliverance (1972) had brought him critical acclaim and a semi-nude Cosmopolitan centerfold had turned him into a sex symbol. Expectations were high but the film was not born under a lucky star. Screenwriter Eleanor Perry, a well-known feminist, claimed that others (among them Robert Bolt, Mrs. Miles' husband) had rewritten her script and ruined the character of Catherine Crocker. The movie also got some negative publicity because of a scandal: Miles' business manager (and possible lover) had been found dead in his hotel room and both she and Reynolds had to testify in the ensuing investigation (*1). "Talking about Cat Dancing brings me pain," Reynolds later said. "So I'd rather not talk about it."

The movie was praised for its breathtaking location photography and some critics liked the romantic spin, but others thought the script too easily turned Catherine Crocker from an independent woman who runs away from her abusive husband, into a docile woman who falls for her kidnapper. The about face may be a bit too sudden and smooth, but note that Catherine remains the dominant character: she picks Groper to become the father of her child, he does not take her by force. Reynolds bemused reticence in front of the rather talkative and resolute lady is sympathetic. The storytelling is a bit sluggish at times, but the script keeps you guessing how things will end. We only learn in the course of the movie where Reynolds needs the money from the robberies for and there's at least one - quite shocking - revelation in relation to his character that will surprise most viewers.

* Jay Silverheels, who appears in the film's finale, is best known for his role as Tonto, the faithful companion of The Lone Ranger
* The action scenes were coordinated by Hal Needham, a personal friend of Burt Reynolds and his regular stunt double. The two struck a rich vein a couple of years later when Reynolds offered Needham to direct his own screenplay called Smokey and the Bandit. The rest is history

(*1) A contemporary newspaper article on the case: * http://archives.chicagotribune.com/1973/03/15/page/10/article/actress-at-whiting-inquest