Invitation to a Gunfighter 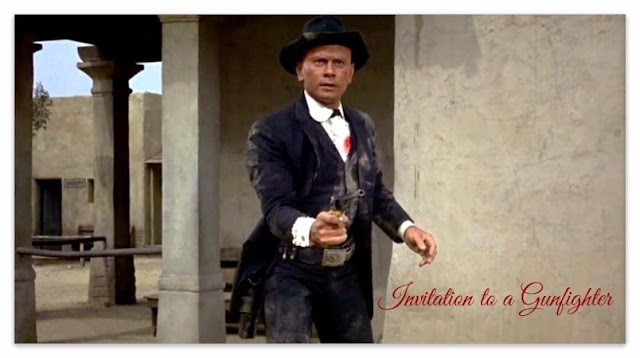 A flawed but interesting western set in the aftermath of the Civil War. It has been labeled as 'a strong contender for the dullest Hollywood western ever' (*1), but others think it's a minor classic (*2). It's far from perfect, but tells a story about racism and  hypocrisy that is probably even more relevant today than it was back in the Sixties.

Yul Brynner is a professional gunfighter who's commisioned to a small border town in New Mexico. Matt Weaver, a war veteran, has returned to his hometown to reclaim his homestead and his fiancée, but Weaver was one of the few inhabitants of the border town sympathizing with the Confederacy and therefore wasn't welcomed by the others. Moreover the town boss, a banker named Sam Brewster has sold his farm in his absence and his fiancée (Janice Rule) has married another man, a Unionist who lost an arm in the war ...

Both men of course want Weaver out of town and pay the professional to to the job, but this is definitely a western with a twist. The gunfighter is a Creole (by the name of Jules Gaspard d'Estaing) who despises white supremacists and therefore has a natural disliking for Confederate soldier Matt Weaver. But Weaver has barricaded himself in his family home and while biding his time, Jules discovers that the situation is far from crystal clear. Brewster is a corrupt businessman who uses the painful memories of the Civil War to swindle people out of their houses, and the townspeople are hypocrites, who allegedly sympathized with those who fought against slavery but look down on Mexicans and hire them for the jobs that were done by black slaves before the war. Soon the Creole gunman becomes a bigger threat to the townspeople than Matt Weaver ...


The film was directed and co-written by Richard Wilson, an Orson Welles disciple; it is talkative and slow-moving and has a static, almost theatrical look. It was nearly entirely filmed on the backlots of the Universal Studios (the house from Psycho, the 'Bates Motel', was used as Sam Brewster's home). There are only a couple of isolated action scenes, but those sparse action moments are intense and the finale is both well-prepared and well-handled; all characters, including Jules, seem cornered, which makes you wonder what will happen and who will survive the final confrontation. Pat Hingle overdoes things a little as the local tyrant and Janice Rule has three men courting her, but as an actress she very little to do, other than looking very worried out of her window (but she's good-looking when she does). Yul Brynner and George Segal on the other hand, are two great leads with contrasting looks and acting styles. I've never been a great fan of Brynner's acting style, but he's near perfect as the dandy-esque professional.