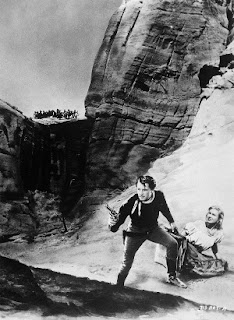 The title of this movie is a bit deceptive. The movie is set in Colorado Territory, but Colorado is also the name of a girl, played by Virginia Mayo. She's a beauty living in a remote place in the desert, who all of a sudden decides to stay with Wes McQueen (Joel McCrea), an escaped convict dreaming of a quiet life, after pulling off one last spectacular heist.

McQueen heads off to the territory from the title, to meet the man who had masterminded his escape from jail. He’s supposed to meet him in a place called the Valley of Death, an exit to nowhere. One character describes it as follows:

“The Spaniards came first and called it Todos Santos, but then arrived the Indians, who massacred them. Then came the pox who wiped out the Indians. Only snakes and scorpions survived, and finally there was an earthquake that took care of them“

On his way to the valley, the stagecoach he's traveling with is attacked by bandits. McCrea fights them off and brings to passengers to safety, earning their gratitude. One of the passengers, a wealthy man called Fred Winslow, feels so much sympathy for the young man, that he even sees a future husband in him for his daughter Julie Ann. All of a sudden, there are two possibilities for Wes McQueen to realize this 'quiet life' ...

Colorado Territory is remake, by the same director, of High Sierra (1941). The remake easily outshines the original; it avoids the sentimental pitfalls of the story and makes far better use of the magnificent landscape, especially in the finale, when a cornered McCrea, after that final heist, flies back to the Valley of Death. Colorado Territory is also a bit similar to director Walsh’s White Heat (also from 1949). Both films are about doom, but while James Cagney’s obsessed and tormented gangster was a man who triumphed in his hour of death (“Made it ma, top the world!”), McCrea is just a weary outlaw, a man who has made the wrong decisions all of his life, and is now at the end of his tether. Appropriately, his death is all but glorious; instead it’s sad and ugly.

“The sun goes West, and so does the opportunity”

This is a western as bleak as they come at this point in history, the late forties. It’s also tense, gritty and cynical. At one point, a sheriff strikes a match on the boot of a hanged man (have you seen this movie, Mr. Corbucci?). The atmosphere is closer to Peckinpah than to Ford. McCrea is a criminal, but he’s also a man of honor, he keeps his word and takes Mayo in tow because he thinks she would be lost without someone to protect her. Dreaming of settling down, he prefers a “respectable” farmer’s daughter to a “bad” dance-hall girl, but he finds out that the respectable girl is willing to turn him in for the reward of $20.000. When he finally accepts Mayo - the only one who ever cared for him - it’s too late, and both meet their destiny in the film’s magnificent finale, which shows the two lovers brought back to ant-size in a stupendous landscape.