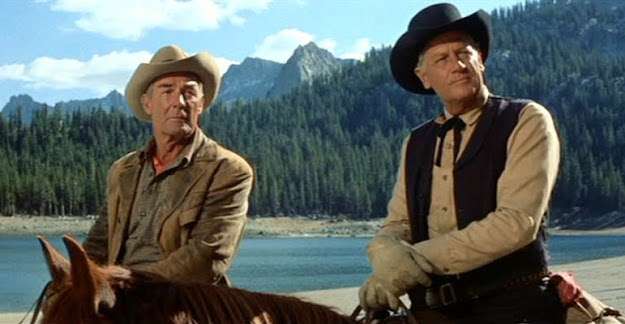 The favorite Peckinpah movie of those who don't like the 'Bloody Sam' of the second half of his career. It's a little movie, made with a budget of no more than $ 800.000, but it's worth every penny at least twice.

It's the story about a former lawman, Steve Judd (Joel McCrea), who agrees to transport a shipment of gold from a mining camp up there in the mountains to a bank in the lowlands. It's a dangerous job (six guards were killed by bandits on previous shipments) so he could use some help. His old friend Gil Westrum, another ex-lawman, now running a traveling sideshow, agrees to join him for a $ 10 pay and so does Gil's younger friend Heck. What Steve doesn't know, is that Gil and Heck have planned to rob the gold themselves somewhere along the trail. The trio is also joined by a young woman running away from her father, a religious maniac who thinks all men are beasts. She is to be married to one of the miners, a man she has met only a couple of times, the good-looking Billy Hammond. But Billy isn't the only Hammond in the mining town, and not all Hammonds are good-looking ...

Although he didn't write it himself (1), the script is full of themes that would dominate Peckinpah's future westerns, like repressed sexuality, friendship under pressure and above all the notion that the West is no longer like it used to be. In the opening scene, Steve is nearly overrun by a car, probably the first he's ever seen (a scene that will be reflected in the final moments of The Ballad of Cable Hogue, when Cable tries to stop a car as if it were a horse - and is overrun). Steve and Gil are struggling with the idea that they're about to become obsolete. Today they can still do small jobs to make a living, tomorrow they will no longer be wanted. The relationship McCrea-Scott is comparable to the Holden-Ryan relationship in The Wild Bunch: McCrea & Holden are the stubborn, straightforward types who stick to their own moral code (("if you side with a man, you stay with him, otherwise you're some kind of animal"), Scott and Ryan are the more shady, more complex types, who change sides and betray a friendship (albeit for slightly different reasons: Ryan doesn't want to go back to Yuma, Scott is preparing for old age!). The advantage of Ride the High County is that the two characters are in each others' presence most of the time, in The Wild Bunch they're separated, they talk about each other, but aren't really confronted with each other.

The scenes with the two aging men in underwear, discussing their situation late at night, are touching, but Peckinpah's directional style needs the open, and not surprisingly the film works best when we're up there in the mountains, in the mining camp with the inebriated judge, the aging, overweight madam (soon as obsolete as our two heroes) and the sex-hungry Hammond brothers. The shootout in the barnyard, chickens running around, is a real achievement. Peckinpah had no more than a couple of cameras (one was flown in for close-ups) and it took six days to shoot it. At first it looks like a rather traditional shootout, the men lining up to face each other, but Peckinpah intensifies it with crane shots, close-ups, rapid cross-cutting and rhythmic editing.

Of the two aging stars, Scott turns in the better performance, but it cannot be denied that his character is also the more interesting of the two (ambiguous characters are nearly always more interesting than straightforward ones). Like the characters they're portraying, the two men were near the end of their career, and there were more parallels between actors and their characters: Mariette Hartley was trapped in an abusive marriage with a man who often beat her, while R.G. Amstrong (who plays her father) was raised in a fundamentalist family was struggling with his faith. Overall the acting is remarkable, with Warren Oates and L.Q. Jones already in Wild Bunch mode and Edgar Buchanan memorable as the drunken judge. Magiette Hartley's Elsa is probably the most interesting female character in any Peckinpah western.

The film was shot in the High Sierras near Bishop, in the Inyo National Forest and various other locations in California. Lucian Ballard's cinematography is breathtaking. It was first shown on a double bill in New York with the adventure movie The Tartars, but it was immediately picked up by the critics, who described it as a "dandy little western". It was shown (and well-received) on various festivals in Europe such as Ghent and Venice. Today many fans think this is Peckinpah's finest film, but unfortunately it's still relatively unknown to large audiences, who tend to identify this director too much with screen-violence and the way it was depicted in late sixties, early seventies, when censors had become more lenient towards a graphic depiction of violence.
Dir: Sam Peckinpah - Cast: Randolph Scott, Joel McCrea, Mariette Hartley, Ron Starr, Edgar Buchanan, R.G. Armstrong, James, Drury, Warren Oates, L.Q. Jones, John Anderson, John Davis Chandler, Jenie Jackson
Note:

(1) According to David Webble, Peckinpah was delighted by the script written by N.B. Stone Jr. and called it the best he had ever read; still he rewrote some of the dialogue and made one crucial change: in the original script Gil (Scott) was killed, not Steve (McCrea); David Webble, If They Move, Kill 'Em, p. 198-222