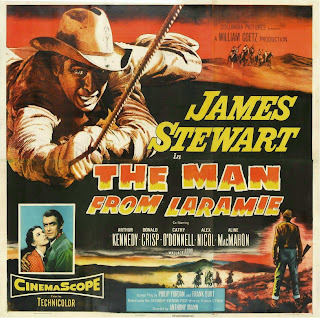 The fifth and final collaboration between director Anthony Mann and actor James Stewart. Visually this one is the most striking of the lot. Officially the movie is based on a story by Thomas T. Flynn, but it owns as much to Shakespeare's King Lear. Mann had been thinking for years of a western version of Shakespeare's play and an earlier script by Philip Yordan was called The King, a man from Laramie. John Wayne was supposed to play the patriarch, but the project never came off the ground. The script was then rewritten as a Mann-Stewart vehicle, but Stewart does not play the patriarch, but a stranger, and his role is less prominent than in their earlier collaborations.

The old patriarch Alec Waggoman is slowly losing his eyesight and is worried about what will become of his empire after his death. His son Dave is a weak-minded young man, and the old man tries to deal with him through Vic, his foreman and adopted son. Vic is loyal, but also afraid that his loyalty will not be awarded because blood will always be thicker than water. Waggoman is haunted by dreams of a man coming from far, with the intention to kill Dave, and is therefore alarmed by the arrival of Will Lockhard, a stranger from Laramie. Lockhard is searching for those responsible for the death of his brother, a soldier killed by renegade Apaches, armed with repeating rifles that must have been sold by them illegally. After a series of incidents involving Dave and Vic, Lockhard is hired by the only real rival of old man Waggoman, the widow Kate Canady ...

Mann's heroes are often stubborn, almost schizophrenic characters, looking for peace but unable to repress their violent instincts when confronted with danger and injustice. Usually their direct opponent is a more extravert, more charming, but morally less conscious reflection of themselves. This typical Mann opposition, of people being confronted with their own alter ego, is still present in The Man from Laramie, but at the same time the situation is more complex: The five central characters (Waggoman, Dave, Vic, Lockhard and Kate Canady) are entangled in intricate plot in which none of them is genuinely 'good' or 'bad': even the psychotic Dave is presented as a spoiled, not-so-smart kid, who acts more out of frustration than pure wickedness.

Visually impressive, the movie is also very physical. In an early scene Lockhardt is dragged behind a horse while his wagon is set on fire and his mules are shot. In a particularly gruesome scene, Dave, the deranged son, deliberately puts a bullet in his shooting hand, an act that has been described as a symbolic castration. The Man from Laramie was one of the first westerns that were shot in CinemaScope and Stewart is often shown against the background of a wide-open spaces, emphasizing his vulnerability and insignificance in a world that is both majestic and inexorable. When he finally meets the one who is responsible for the death of his brother, he's not able to shoot him. But in this cruel world no one can outrun his destiny.